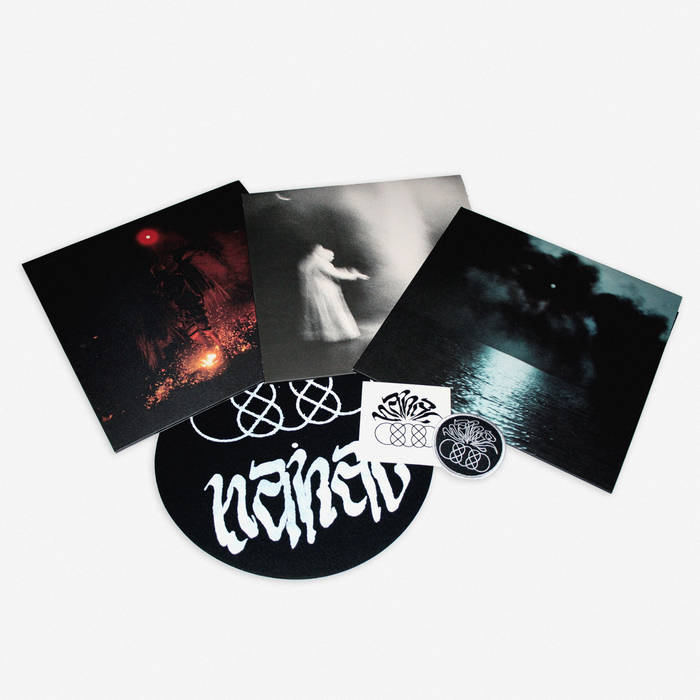 THEY PROMISED US A BRIGHT FUTURE, WE WERE CONTENT WITH AN OBSCURE PAST
NAHAL002

Behind the ironic-prophetic moniker of Good Luck In Death are the duo of Parisian electronic producer Paul Régimbeau (Mondkopf, Extreme Precautions, Autrenoir, FOUDRE!) and Lebanese artist and performer Charbel Haber (The Bunny Tylers, improviser in the Johnny Kafta's Anti-Vegetarian Orchestra, Scrambled Eggs' guitarist and singer, and all 'round explorer of a new pan-Arab psychedelia with the ensembles Malayeen and Orchestra Omar).

The duo met in Spring 2017 when they were invited to join the free rock collective Oiseaux-Tempête for their AL-'AN! tour and residency at L'Autre Canal in Nancy. Charbel and Paul begun to improvise during the breaks at the residency, with resulting sounds growing and developing into those of a common language. At the beginning of Summer they found themselves a home at studio Mer Noir in Paris, and laid down the tracks of their first album.

With the appropriately named 'They Promised Us A Bright Future, We Were Content With An Obscure Past' Good Luck In Death delivers an almost anti-futuristic and dreamlike manifesto that juxtaposes orchestrated minimalism against the luxuriance of dense melodic flights. Processed guitars played with the e bow, synthesisers and analogue machines casting shadows of their lazy kinetic journey, a dialogue in the strata of vaporous ambience. The duo borrows in equal measure from the introspective power-ambience of the most recent Mondkopf ('They Fall But You Don't' - In Paradisum, 2017) and the sensuous and crazy experiments of Charbel Haber's 'Of Palmtrees & Decomposition' (Discrepant, 2016). The musical drift blazing from East to West, the borders as blurred as the harmonies, modes, scales and emotions which give them shape and form. And through the waves of electric haze, emerging veiled from the dream, comes a prediction, a premonition, a prophecy, grainy and ecstatic, like a cloud of fire.

Multi-instrumentalist, musician, photographer and co-founder of groups such as Oiseaux-Tempête, Le Réveil des Tropiques, FOUDRE!, The Rustle Of The Stars and FareWell Poetry, Frédéric D. Oberland takes, as the starting point for his sophomore solo album, a vertiginous dive into George Bataille's 'Inner Experience' and the cave of Dante's 'Inferno'.

A condensed version of a sound and visual installation created in the basement of the contemporary art space Labanque in Béthune, 'Labyrinth' invites us to bare witness to the loss of landmarks and to feel then immersive sense of trance. The point of departure, the opening note, is the A, the lowest of the piano, from which we slide, almost imperceptibly, snapped up by a wave of sounds, rich in their instrumentation, sometimes rough (electric guitars, console feedbacks, bursts of transformed drums and saxophone screams crackling in their dissonance ) and at other moments delicate (hushed and scattered chords of piano, mellotron and distant synths in whispering voices). Accompanied by the drumming and spatial mixing by Jules Wysocki, the six connected stages/chapters of this immersive journey embrace expanse. In a continuous game of call and response between the intimate and the vast, 'Labyrinth' plays with the dynamics, the silence and the musical genres (ambient, free-jazz, electronics, acousmatic), kneading and pulling the form and structure of the tracks in ever changing attempts towards transfiguring the chaos.

More radical in continuity and more outlandish than his first album 'Peregrinus Ubique' - 'stranger / traveller everywhere' - (VoxxoV, 2015), the 'Labyrinth' of Frederic D. Oberland recalls in these almost orgiastic collages, the work of "editing" provided for his nomadic Oiseaux-Tempête albums (Sub Rosa, 2012-2017), yet here in a more introverted territory, weaving a cocoon whose ascending and cyclical pulsations intoxicate us, as if under hypnosis.

Hailing from Toulouse in the South of France, Saåad is composed of Romain Barbot and Grégory Buffier. Since 2009 the prolific pair has been spending the dark hours of night-time exploring the realms of sound with a combination of epic, abstract drone and ambient improvisations, new concepts, elaborate murky atmospheres, and a strong visual identity as the trademark of their collaboration.

Pressed on vinyl for the very first time, Orbs & Channels is also the first reissue release by NAHAL Recordings. This classic dark ambient album by French duo SAÅAD immerses listeners into the maze of a haunted and shadowy invisible world, where superstition and the Wings of Desire's immortal angels are playing a key role. Making audible that which cannot be uttered, Orbs & Channels is an ode to the beyond, the expression of the inexpressible that is associated to it, and an echo of unfathomable grief. Housed with new artwork and remastered by James Plotkin, this edition is including a download card with previously unreleased bonus track.

Included as a special digital bonus track inside our 2018 bundle, this rough and blissful live piece was improvised by night last Summer, in an outdoor amphitheater lost in Corsican nature.

The Providenza festival takes place in a very particular place: above the village of Pieve di Tenda, in the Nebbio region close to Bastia. On the side of a mountain, a vast abandoned agricultural land is now slowly being put back into production. It seems to be floating in the sky. Facing the sea.